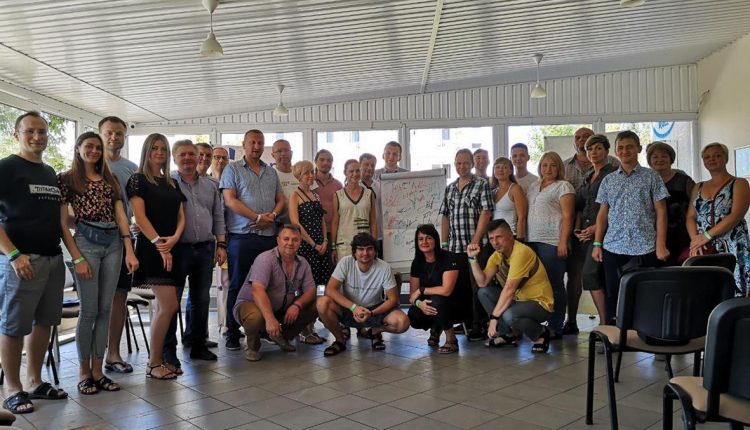 The event was entitled “European Ideas for Ukraine. From Robert Schuman to the Present” and took place from August 29 to August 31 in the city Zatoka near Odesa.

The event was attended by 32 participants representing various NGOs and movements and independent media, media activists and bloggers from different regions of Ukraine. Reports were presented to participants:
• Yuriy Mindyuk, Chairman of the Board of FDA, who gave a report on “The Concept of a United Europe as a Place for Collaboration and Prosperity without War and Conflict”;
• Yuriy Goncharenko, Member of the Board of FDA, who spoke about contemporary Ukrainian views on the ideas of Robert Schuman and Konrad Adenauer;
• Anna Masna, International Secretary of the Ukrainian Student Association, spoke about how Ukraine has historically gone to the European Union and what the problems were along the way;
• Valeriy Maidanyuk, journalist and expert at the Foundation for the Promotion of Democracy, made a report on “How Christians Should Fight for the Christian Vision of Europe”.

The following topics were also discussed:
• The problems and perspectives of the Christian values ​​of a united Europe;
• The current landscape of Ukrainian politics and the problem of Ukraine’s European integration;
• Cooperation in Eastern Europe. The Intermarium Project.

The outcome of the meeting was a working group of the Joint Memorandum of Civic Action, proposed by the FDA, which aims to unite the various personalities, civic organizations and movements on the basis of Christian democratic values ​​in order to protect the European future of Ukraine. 24 from 32 participants signed Network Action Plan. They also agreed to continue their work at the following seminars and to involve as many participants as possible.

Until the next seminar, scheduled for October 2019, participants will continue to work online and through personal contacts. After completing the official part, participants continued informal communication in groups.

Violent Dictatorship: Persecuting Faith in the Occupied Territories in the East of Ukraine