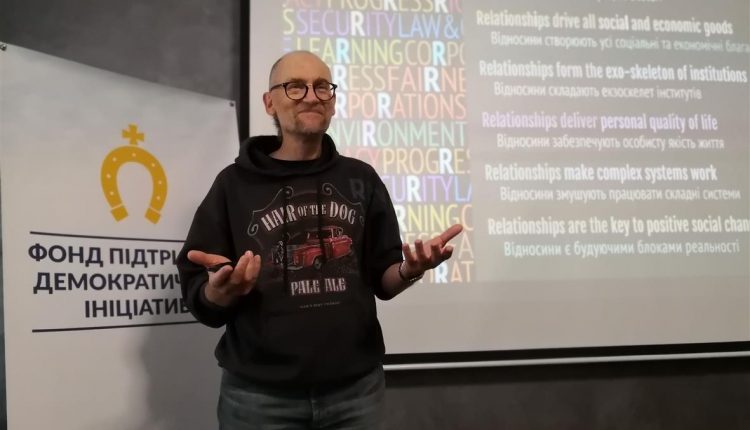 From September 20 to 22, Kyiv hosted the international conference “After Capitalism: Economy, Values and Sustainable Society”, organized by the Foundation for Assistance of Democratic Initiatives together with the Sallux Foundation.

A total of 46 participants took part in the event. The foreign guests attending the conference were:

Following introduction of the participants and opening remarks, Yuriy Honcharenko, vice-president of the Foundation for Assistance of Democratic Initiatives, made a presentation on “Relational economy. What elements can be implemented in Ukraine”, that included presentation of the book “After Capitalism: Rethinking Economic Relationships” by Paul Mills and Michael Schluter.

The book was published jointly by the Foundation for Assistance of Democratic Initiatives and the Sallux Foundation. Soon, presentations of this book will be held in Kiev and other Ukrainian cities, the book dealing with a new vision of economic development, different from the prevailing discourse between liberalism and social populism. In particular, it tells about the real implementation of Christian values in economic models.

The next speaker, Roman Skliarov (Center for Economic Democracy), made an interesting presentation on the “Future of capitalism: economic democracy and the creative class“, in which he spoke about his own vision and forecast for the post-capitalist future, where the real alternative can be a cooperative movement.

The next speaker, Andriy Hnidets, head of the Department at the National Health Service and a member of the Association of Christian Lawyers, spoke about his vision of the “Role of Christian democracy in shaping value-oriented public policy“. This presentation, like the previous one, also caused a lively discussion among the participants of the event.

The next day, the conference began with a presentation on “Economic Growth and Social Responsibility“, by Volodymyr Panchenko, Ph.D. in History, director of the Institute for Social Studies. As one of the reviewers of the book “After Capitalism: Rethinking Economic Relationships”, he spoke about his vision of this issue.

This was followed by an unscheduled speech by a guest of the conference, a well-known Ukrainian politician, economist and public figure, president of the Association of Ukrainian banks Oleksander Suhonyako. He shared his thoughts on the causes of modern economic crises and methods of dealing with them, he also spoke about the lack of alternatives for humanity to replace the modern economic model with another  – a more moral one

Then, Christian Meinen, a representative of the Sallux Foundation and a security expert, made a presentation on “Sustainable society, security and prosperity as an idea of Christian democracy”.

Gabriela Urbanova, another representative of the Sallux Foundation and an experienced economist, told the audience about her vision of the “Relational model of the state and economy as a driver of change for the future of Ukraine.”

Later on, the actual concept of relationism as a philosophical and economic model was presented by one of its co-authors, David John Lee, who is a representative of the relationism.org portal (United Kingdom).

Then, the participants were divided into working groups and completed tests from an expert on relationism, with an objective to show the effectiveness of this theory in practice.

The results were presented in the form of short presentations.

This was followed by a presentation by Oksana Horkusha, Ph.D., senior researcher at the Department of Religious Studies of the Institute of Philosophy of the National Academy of Sciences of Ukraine, on “Problems and prospects of Christian values during the era of populism and irresponsibility – modern Ukrainian context“.

The last speech of the second day of the conference was a presentation by Bohdan Pankevych, a well-known public figure, diplomat, member of the Council of the Ukrainian Galician Party, on the topic “What should we do with the current political landscape in Ukraine?“.

The next day, the conference participants attended a morning service, then, they discussed practical steps to implement Christian values in Ukrainian politics and the fight against pro-Russian and populist revenge.