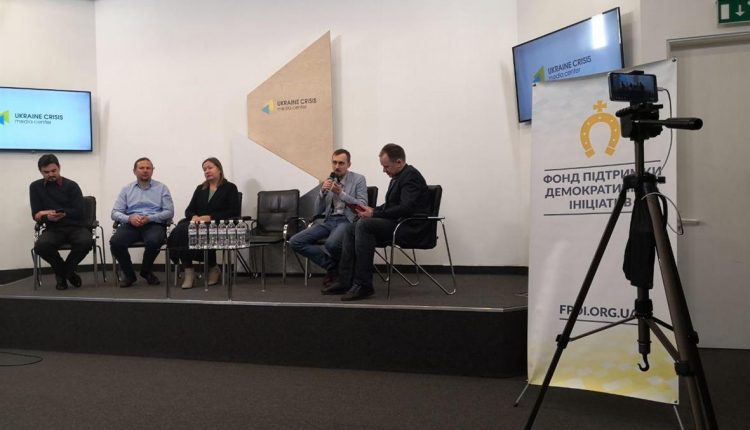 On January 30, at 01:00 pm., Ukrainian Crisis Media Center held a discussion on the draft laws submitted to the Verkhovna Rada by representatives of the current Ukrainian government: “On amendments to certain legislative acts of Ukraine on ensuring national information security and the right to access reliable information” and “On media”.

As a result of the discussion, an editorial group has been set up to prepare an open letter to the developers of the draft laws, Verkhovna Rada and the President of Ukraine.

Yuriy Mindyuk, organizer of the event and president of the “Foundation for Assistance of Democratic Initiatives”, made an opening speech.

Participants of the discussion:

The participants came to the conclusion that it is very important that such changes to the legislation are not adopted without detailed discussion in a professional environment.

Of course, the fight against distorted information is one of the components of national security. Therefore, the development of national legislation in this area is long overdue. On the other hand, freedom of speech and the possibility of criticizing the actions of the authorities should not be abridged under the guise of fighting fakes.

Reasonable comments were made on the draft laws under discussion and an editorial group was created to draft a joint document, which will be sent to both the developers of the document and those who should vote for it.

Following on from the results, a separate media briefing will be held.

Secretary of the editorial team – Yuriy Honcharenko, vice-president of the Foundation for Assistance of Democratic Initiatives.

Contacts of the organizers: [email protected]