The book named Christian Democracy. Solutions for Ukraine and Europe and the InfoLight.UA information security initiative were presented in Lviv 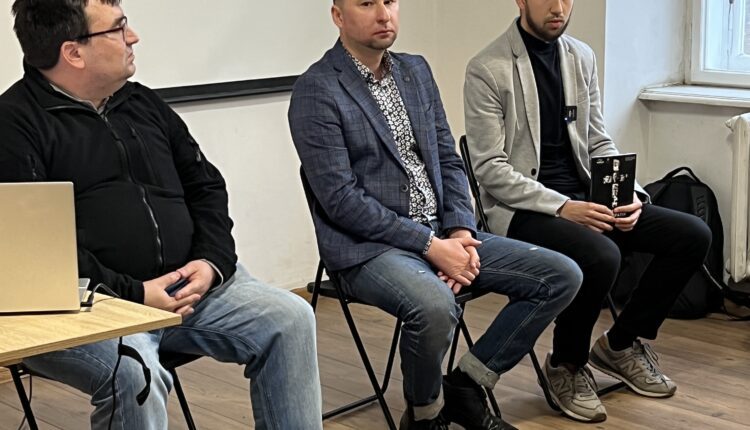 On 10 November, the Lviv Regional Youth Center held the presentation of the book named Christian Democracy. Solutions for Ukraine and Europe and other projects implemented by NGO Foundation for Democracy Assistance in the field of education and information hygiene.

Yurii Honcharenko, Vice President of the Foundation for Democracy Assistance presented the main areas of activity, in particular, book publishing, educational projects and the InfoLight.UA initiative, in which, with the support of the Hanns Seidel Foundation in Ukraine, online trainings on information hygiene, fact-checking are held in Ukraine, citizens are taught information security and the ability to carry out informational resistance to the Russian propaganda.

“Since the beginning of the war in 2014, we (the Foundation for Democracy Assistance) have focused more on the promotion of the country defence capability, volunteer, educational, volunteer support, and various publishing activities. The InfoLight.UA project was created, which conducts online trainings and provides information to the Ukrainians through the website and social networks”, Yurii Honcharenko noted.

He presented a number of books and brochures that have been published recently.

Valerii Maidaniuk, candidate of political sciences and expert of the Foundation for Democracy Assistance, who is the co-author of the book named Christian Democracy. Solutions for Ukraine and Europe, emphasized that this book reveals the true essence of the ideology of Christian democracy, which was the basis for the founding of the European Union and that knowledge of these basics is extremely necessary for modern Ukraine, which has become a candidate for EU membership.

“Nowadays, not many people know that it was Christian-democratic politicians, governments, and parties that became the political forces, which built successful European countries, such as Germany, the Netherlands, Austria … And if we take reforms and various social initiatives, then it is Christian Democrats have done a lot to make Europe today the point on the planet that many people perceive as a paradise of public welfare”, emphasized Valerii Maidaniuk.

Valentyn Balahura, political analyst and public figure, who represented the InfoLight.UA initiative, emphasized that the best experts in their fields, from cyber security to OSINT and PSYOP, were invited to the project as lecturers.

“We need to explain, first of all, to young people that the next generations of the Ukrainians should have value orientations. As for the InfoLight.UA project, we are currently engaged in education not in terms of ideology, but show how the Russian Federation is trying to influence our brains and how to counteract it”, noted Valentyn Balahura. He also believes that the combination of knowledge and value-based performance measurement allows better resistance to the Russian aggression

The participants expressed their gratitude to the Lviv Regional Youth Center, the Coordination Staff for the Treatment of Prisoners of War, the Hanns Seidel Foundation in Ukraine and the Sallux Foundation for their cooperation and help in organizing the event.

Summary of the book:

Christian democracy became the ideology of reconciliation and integration for European countries after the Second World War. Christian Democratic leaders, such as Konrad Adenauer, Robert Schuman and Alcide de Gasperi, not only laid the foundations of the economic prosperity of Germany, France and Italy, but also became the fathers founded the European Union. The universal values ​​of Christian democracy raised post-war Europe from the ruins and became the foundation of social state based on freedom, solidarity and responsibility.

Summary of the InfoLight.UA initiative:

The low level of information literacy of the Ukrainian citizens, especially after the onset of full-scale Russian aggressive invasion, is strikingly visible and has a negative impact. In particular, for this reason, fakes, dissemination of false information, and propaganda are widely distributed.

The state does not always have enough resources and seeks partnership from non-governmental organizations and volunteers.

A very difficult situation with the information activities is observed in the temporarily occupied territories, where the Ukrainian citizens do not have access to objective sources of information, are in a state of constant stress and despair.

Also, due to lack of knowledge on safe means of communication, there is no information on the development of events in these territories, due to which the Ukrainian society and the international community do not receive objective information and are often under the influence of misinformation and manipulation. Martial law, the need to involve the entire society in the defence of the country creates conditions for sowing seeds of mistrust and even certain conflict situations in the interaction between the society and the army.

The public authorities, due to lack of time and resources, do not always respond to these situations in time, which gives further scope for manipulations and influence of special information operations of the Russian special services.

In view of the foregoing, within the framework of the InfoLight.UA Project, educational programs for improving media literacy, combating fakes and propaganda are being implemented. Special emphasis is placed on the creation of an information product for the Ukrainians in the occupied territories and cooperation between the society and the army. The implementation of these programs is aimed, among other things, at the interaction between the society and the army.

The project is implemented by the Foundation for Democracy Assistance (Ukraine) with the support of the Hanns Seidel Foundation in Ukraine (Germany).